Last year, stunning revelations about the systematic scientific fraud committed by social psychologist Diederik Stapel sent shockwaves through the Dutch academic community. This week, the official committee in charge of examining the case, headed by the ex-president of the Royal Dutch Academy of Sciences Prof. Dr. Willem Levelt, presented its final report Flawed Science: The Fraudulent Research Practices of Social Psychologist Diederik Stapel. The report can be downloaded here. The affair is certainly the largest and most spectacular case of scientific fraud in Dutch academic history, and places Stapel in the all-time top-10 of academic swindlers; but from a very well-researched book by science journalist Frank van Kolfschooten one has to conclude that it is far from unique.Van Kolfschooten's book (its title could be translated as Derailed Science: About Fraud, 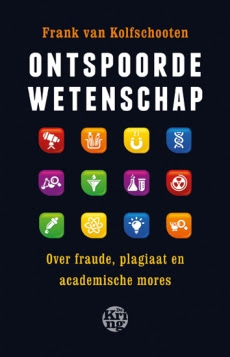 Plagiarism, and Academic Morality) provides a very readable and extremely disconcerting overview of the history of plagiarism, fraud, and other forms of scientific deceit in the history of science and scholarship in the Netherlands, and should give any reader pause for thought. As emphasized by the Levelt committee as well, most worrying about the Stapel affair and other cases of systematic scientific deception is the serious questions they raise about the current state of the academic system. How is it possible that a well-known scholar could get away, for many years, with a large string of publications in which all his hypotheses were always spectacularly confirmed, by experimental data that were widely perceived by colleagues as "too good to be true", but the correctness of which could never be confirmed because their exclusive source was Stapel himself and no one else? How to explain that these results, in spite of their inherent implausibility, kept being accepted by the reviewers of important peer-reviewed journals? It is only due to the courage of three (still anonymous) Ph.D. students working under Stapel, who assumed the role of whistle-blowers at great risk to their own academic career, that the deception was finally discovered. Perhaps the most important passages of van Kolfschooten's book appear in his chapter "In the Publication Bubble", particularly on pp. 115-116. I quote: "A report published by the VSNU (the organization of Dutch universities) published in May 2012 shows that between 2000 and 2010, Dutch scholars have been devoting more of their time to teaching, while more scientific publications were expected of them at the same time. Their research is financed ever less frequently by their own university ("first money stream"), but must be earned through subsidies in competition with other scholars. This requires scholars to write grant applications, and the energy and time needed for this goes at the expense of the research itself [and here we might add that countless scholars are asked to read and assess such applications or sit in committees, obviously at the expense of their research time as well, WJH]. Furthermore, the number of successful applications keeps decreasing. In addition, the workload of professors and lecturers is increased further due to a steady increase in the number of Ph.D. students (the number of dissertations grew from 2360 to 3700 between 2000 and 2010). As a result, the number of Ph.D. students that they must supervise has risen with 40% over the last ten years. Add to this the fact that, in order to allow the number of scientists to grow, the budget for supporting personnel has been reduced. This has increased the work pressure both for scientific and for supporting personnel. Nevertheless, the increase in the number of publications (27%) over the last ten years has been greater than the increase in personnel (22%)" (p. 115-116)".

Such cool figures suggest that someting is seriously rotten in the state of academia. The first thing to be said is that these developments can never be an excuse for plagiarism and fraud. But the next thing to say is that there is reason to ask serious questions about an academic "publish-or-perish" culture that not only allows systematic fraud to pass unnoticed, but even pressures scientists to cut corners where they can, and actively seduces them to privilege quantity over quality. As the general climate of academic research in the neoliberal university is getting ever more unhealthy, one should not be surprised when diseases are the result. Elsewhere in his book, Van Kolfschooten mentions further ingredients of what is already a toxic mixture. Think of the fact that, again and again, academic top managers have tried to cover up cases of fraud and plagiarism, and have been intimidating whistleblowers, because apparently they are more afraid of reputation damage for their institution than concerned about scientific standards and morality. Think of the fact that science is increasingly expected to deliver "products" to a market, rather than to solve problems, ask questions or offer new perspectives (van Kolfschooten, p. 117). Think of the trend of lowering the standards for accepting dissertations in order to cash in as much as possible of the money a university receives for each successful promotion (pp. 117-118). Think of scientific journals refusing articles that are "too technical" because this lowers their impact factor (p. 131), or even demanding that the author add references to articles from the same journal as a condition for acceptance, because this will increase the journal's impact factor (p. 131). Think of psychologists "torturing the data until they confess" and repeating experiments until they finally result in a statistically significant result (p. 253). And of course, think of the perverse phenomenon of "science on demand", where financial sponsors pay scientists to furnish them with the results they like (p. 280). The list is far from complete.
To all this I would add another aspect that is seldom mentioned. Particularly in the humanities, postmodern ideologies have contributed to an "anything goes" mentality that questions and subverts any standards for distinguishing between "true" and "false", suggesting that scholarly debate is never more than a gratuitous exchange of subjective opinions anyway, and that the academy is really not about trying to advance our knowledge but only about professors trying to advance their careers and getting on top in the chase for power and prestige. In the long run, perhaps the most damaging effect of the Stapel affair is that his behaviour confirms and strenghtens popular (and populist) suspicions that this is what science and scholarship is really all about: not knowledge but power. Have we forgotten that it was supposed to be the other way around?