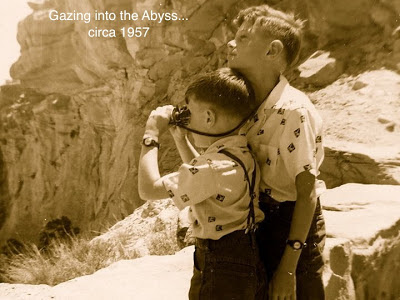 When I heard that Dennis McKenna had published a book about his life and that of his brother Terence (deceased in 2000), I ordered it immediately. Terence became famous during the 1980s and 1990s as the most articulate and charismatic "public intellectual" of the psychedelic counterculture - movies of his talks and interviews are spread all over the internet - and I find him particularly interesting as a hyper-radical hippie esotericist steeped in alchemical and other "hermetic" lore (read entirely through the lenses of "Eranos scholars" such as Jung and Eliade) as well as the largely unacknowledged source of 2012 millenarianism (for those who are interested in that story: see my article "'And End History. And go to the Stars': Terence McKenna and 2012").
While McKenna's work was all about the "re-enchantment of the world", The Brotherhood of the Screaming Abyss: My Life with Terence McKenna has had a profoundly disenchanting effect on me. Intentionally or not (probably not) Dennis exposes the public image of Terence McKenna as little more than a myth and replaces it by a far less attractive picture of the actual person. There is no doubt that his older brother possessed a sharp mind, a delightful "gift of gab", and a great sense of humour; but apparently he was also an extremely egoistic narcissist with little regard for anyone except himself. As Dennis puts it, Terence "seemed not to have an empathetic bone in his body" (95, cf. 86), got angry when someone disagreed with him or challenged his ideas (25), and was incapable of forgiving people (93): "once you got on his shit list, you stayed there; there was no going back" (94). Interestingly, given her current association with right-wing values, he turns out to have been a fan of Ayn Rand's writings, which "validated, for him, his anti-authoritarian stance as well as his belief that it was perfectly OK to be totally selfish" (95). 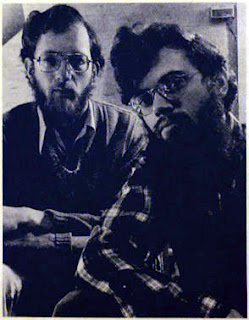 The McKenna legend revolves essentially around the radical experiences of "the brotherhood" (expanded with a few friends) at a settlement called La Chorrera deep in the Colombian Amazon forest, in 1971: "In some respects, everything in life before we arrived at La Chorrera was a prelude to the events that engulfed us there; and everything afterward has been a reflection of them" (241). Having ingested an extremely potent mixture of psychedelic substances, the brotherhood sincerely believed that, as the first human beings in history, they had found the secret of the philosophers' stone and had opened the way for the entire human race to escape from history and "go to the stars"... Dennis now claims that most of the radical ideas that were central to this Colombian adventure were actually his own rather than Terence's (248; and see also p. 149 about the seminal role assigned to a friend, John Parker), and he reserves the starring role for himself rather than his brother; but apart from this, his rather dry account adds disappointingly little to the brilliantly written descriptions in Terence's True Hallucinations (1993). But even more disappointing is Dennis's inability or unwillingness, even decades afterwards, to draw the obvious conclusion that what happened to them at La Chorrera may subjectively have been very impressive to them at the time, but can quite easily be explained as a monumental psychedelic delusion supported by wild theories that (as Dennis admits himself) may "sound like scientific jargon, but ... are nonsense" (255). I see no good reason to make such a big deal of it all, but Dennis seems determined not to apply Occam's Razor: surely he makes quite some sceptical noises throughout these chapters, but one has the impression that in his heart he still wants to believe that somehow, in some sense, it was all true.
Of course it is hard to let go of an obsession to which one has devoted most of one's life, and perhaps all this wavering can be explained, partly at least, out of simple loyalty to his brother's memory. In my article on McKenna (see link, above) I expressed my respect for Terence's unflinching acceptance of what is known as "the Watkins objection". In their book The Invisible Landscape (1975), grounded in the La Chorrera experience, the two brothers had developed their famous "timewave theory", according to which, among other things, a radical "concrescence" would take place in 2012. When a young mathematician, Matthew Watkins, explained to him that the mathematical foundations of the theory were unsound, Terence apparently accepted the argument and endorsed the publication of Watkins' "Autopsy for a Mathematical Hallucination". As I have discovered since publishing my article, the reality may have been slightly less heroic. According to Dennis, the refutation of his theory affected Terence deeply and shook his confidence (456-457); but more importantly, when Samten Dorje asked him point blank, in 1997, whether he actually believed in the Timewave theory, apparently the answer ("with a twinkle and a smile") was "No. But it pays the bills" (see Dorje, Did Terence McKenna believe his own theory?). One is forced to conclude from Dennis's biography that this was probably the truth of the matter. Terence had "inherited his father's talent, or flaw, for never letting facts get in the way of a good story" (23), and during the last decade of his life he seems to have depended financially on public appearances before audiences that simply expected him to deliver inspiring talks about the "end of time" in 2012. What to do under such circumstances? Perhaps one might say that, by the end of his life, Terence McKenna found himself trapped by his own theory.
At the end of the day, the story of The Brotherhood of the Screaming Abyss is a sad one: it tells us about fervent hopes and great expectations never fulfilled, grand but feeble theories that inevitably suffer shipwreck on the hard rocks of reality, and two brothers who throughout their life, each in their own way, refuse or are perhaps unable to recognize that truth. Dennis, who pursued a scientific career and became a respected ethnopharmacologist, never seems to have resolved the conflict between myth and science. As for Terence, who rejected science altogether (282): he was finally swallowed whole by the myth of his own making.