Of Essences and Energies 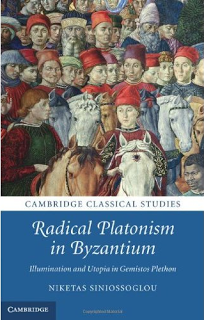 For some reason I am fascinated (dare I say “obsessed”?) by the history of the conflict between “paganism” and Christanity. Some years ago, when I discovered Gore Vidal’s novel about the 4th century pagan emperor Julian and his battle with the “Galileans,” I just couldn’t put the book out of my hands. This summer, sitting in the sun on my balcony and playing with my cats, I experienced a similar sense of excitement and fascination while reading a brandnew monograph about paganism and Christianity in the late Byzantine Empire. Niketas Siniossoglou’s Radical Platonism in Byzantium (Cambridge University Press 2011) is a provocative analysis of the Platonist philosopher / closet pagan George Gemistos Plethon and his battle with the Hesychast orthodoxy associated with Gregory Palamas. According to the Hesychast tradition, human beings are able to experience God’s “energies” in the world but not his ineffable “essence,” which exists beyond the boundary of Nature or the sphere of Being. The “supra-essential,” uncreated Light of the godhead could, nevertheless, be experienced in one’s heart and seen with one’s eyes, through radical psychophysical experiences of illumination (modeled after the experience of Jesus’ three apostles on Mount Thabor) that were supposed to be given by God’s grace in response to intense practice of spiritual techniques such as respiration control, concentration, uninterrupted prayer, and invocations of the name of Jesus. Siniossoglou argues that this perspective clashed with a hidden tradition of Platonic paganism that had been present in Byzantium for centuries and culminated in the writings of Plethon. Hesychasts aspired to a bodily experience of “entering within the uncreated light, seeing light and becoming light by divine grace” (p. 95), whereas Platonists aspired to “intellectual union with the divine, that is to say, the ecstatic ascent of the intellectual part of man alone, a process coinciding with the separation of soul and body (psychanodia)” (ibid.). The Hesychast attempt to keep Creator and Creation apart by distinguishing God’s uncreated essence from his energies was unacceptable for “pagan” Platonists: God’s energies could not be separate from his essence, and hence God could not transcend the sphere of Being but somehow had to be part of it. As such, he was not above nature, and his very essence should be accessible by the human mind or intellect in a state of “rational” ecstatic contemplation. In short, God could be known by the human mind’s natural faculties, whereas the Hesychasts claimed that God’s radically unknowable essence could only be experienced in a sensual but non-rational fashion through divine grace. 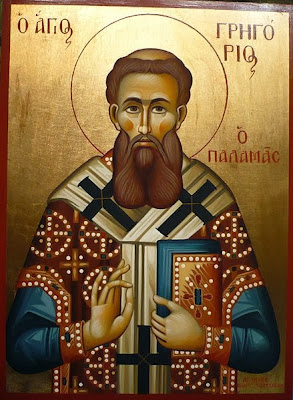 But is this distinction between Hesychast Christianity and Platonic Paganism really as sharp as Siniossoglou wants us to believe? Let me emphasize how much I admire the deep learning, penetrating intelligence, and profound analysis that is evident on every page of his book – not to mention the fact, of which I’m very much aware, that Siniossoglou’s knowledge in these domains is vastly superior to my own. The problems that I see do not have to do with his unquestionable expertise but, rather, with the intellectual background agenda that informs his analysis. It seems to consist of two parts: essentialism and rationalism. To begin with the first: surprisingly, and quite courageously given the prevailing climate in academic research, Siniossoglou argues with great passion, throughout his book, for a return to essentialism in the practice of intellectual history (p. xi, and passim): rather than blurring the boundaries between “Christianity” and “paganism,” we are asked to recognize them as “trans-historical paradigms” (p. xi) that ultimately cannot be mixed or combined because each of them answers to an intrinsically different internal logic. And secondly, Siniossoglou sees the paradigm of “Christianity” (here represented by Hesychast mysticism) as ultimately grounded in irrational attitudes and bizarre claims of experiential phenomena without serious epistemological import, whereas the paradigm of “paganism” reflects the kind of rational attitude that would ultimately lead to “modern epistemological optimism and utopianism” (p. x) and anticipates Spinoza and the Enlightenment (see the Epilogue, pp. 418-426).
Siniossoglou appears to think in terms of mutually exclusive binary opposites: it’s either essentialism or historicism (although admittedly he doesn’t use that term), either Christianity or paganism, either rationality or irrationality, and so on. As regards both his “essentialist” and his “rationalist” agenda, I would argue that this leads him to overlook the possibility of intermediary “third term” options. He is right that a methodology of extreme historicist relativism will ultimately leave us blind to fundamental deep structures and categorical distinctions that are at work in intellectual history; but on the other hand, if we take essentialism to an extreme, we end up with no more than theoretical abstractions divorced from historical reality and its messy complexities. To be honest, I suspect that Siniossoglou is too good a historian to be really the essentialist he professes to be: his actual approach seems quite compatible with the kind of history of ideas, or intellectual history, associated with Arthur O. Lovejoy's methodology, which manages to avoid both horns of the dilemma (for my basic line of argument in that regard, see this article, especially pp. 2-3 and 19). In short, Siniossoglou’s basic point is well taken, but I do not think he needs essentialist approaches to make it. As regards his rationalist agenda, I would question the double assumption that Hesychast mysticism had nothing to do with “knowledge” (because it was “irrational”) while Pagan/Platonic philosophy had nothing to do with “mysticism” (because it was “rational”). This simple opposition seems a projection of post-18th century Enlightenment assumptions back onto late medieval intellectual culture. Siniossoglou is certainly right in emphasizing that Plethon’s monist worldview left no room for a “super-essential” divine essence separate from Being, with the implication that human beings are not dependent on divine grace but possess an inborn, natural ability for gaining higher or absolute knowledge. But I’m not so convinced that this “epistemological optimism” is necessary “rational” in a sense that is reminiscent of Spinoza or the Enlightenment. We are dealing here with some form of ecstatic contemplation more akin to Platonic manía, as admitted by Siniossoglou himself. As an alternative to both Christian “faith” and philosophical “reason,” I would range it under a third category that could be referred to as “gnosis.”
Given his agenda of highlighting Plethon’s rationalism, it comes as no surprise that Siniossoglou seeks to downplay the relevance of authors such as Suhrawardi, who has often been mentioned as a background influence on Plethon, but who claimed that the Platonic quest culminated in visions that sound peculiarly similar to those of… the Hesychasts: “let [the philosopher] engage in mystical disciplines … that perchance he will, as one dazzled by the thunderbolt, see the light blazing in the Kingdom of Power and will witness the heavenly essences and lights that Hermes and Plato beheld” (Suhrawardi, The Philosophy of Illumination, Walbridge & Ziai ed. [1999], 107-108). Again, it would seem to be the same rationalist agenda, combined with his essentialist methodology, that forces Siniossoglou to conclude that many later Platonists, such as Proclus, were not really Platonic, and not really “pagan” either! Their “introvert, defeatist and passive late antiquity Neoplatonism bordering on obscurantism” (p. 191) is, again, too close to Hesychasm for his taste, and too different from his idealized picture of a wholly rational Plato. Of course, Siniossoglou knows that there’s a different side to Plato as well, which would seem to imply “that man’s intellectual resources are not sufficient to know ‘the divine and lofty things’ but require ‘some sort of inspiration’ (ἐπίπνοια) that will illumine him and uplift him to that high level” (p. 177). Apparently, however, he seems prepared to draw the conclusion that whenever he falls short of the rationalist ideal, even Plato himself is not “really” a Platonist…
Be that as it may, and regardless of what one may think of its essentialist and rationalist subtexts, Radical Platonism in Byzantium is an eye-opener that deserves to be read and re-read. Apart from Plethon and Palamas, it introduced me to a whole range of deeply intriguing thinkers whose very names I had never heard before, let alone that I knew anything of their work or their ideas. If realizing the extent of one’s ignorance is the beginning of wisdom, then this book is for anyone who aspires to become wise.