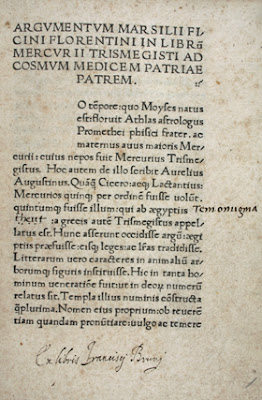 In the spring of 2002, a group of devoted Ficino aficionados met at the home of Prof. Sebastiano Gentile to discuss the need for modern critical editions of the great Florentine Platonist’s writings. One of the young scholars present at this meeting, Maurizio Campanelli, decided to take a closer look at Ficino’s famous translation of treatises I-XIV of the Corpus Hermeticum, first published in Treviso in 1471 as Hermes Trismegistus’ book on the Power and Wisdom of God (De Potestate et Sapientia Dei) but better known by its alternative title Pimander. He was in for an unexpected surprise. Although certainly no beginner in Latin anymore, he notes, ‘the number of passages of which I failed to really understand the significance followed one another at a disquieting pace’. In other words, much of the text just didn’t make sense at all. Clearly something was wrong – but what was it? Since the Greek original is perfectly comprehensible, the initial suspicion fell on Ficino himself: could it be that his famous translation, finished in 1463, had in fact been so bad as the edition would seem to suggest? But no: a crucial manuscript from 1466, heavily annotated with corrections in Ficino’s own hand, showed otherwise. Apparently the problem was with the famous Treviso edition of 1471 itself, on which the great majority of 16th-century editions would later be based.
Now all of this may not seem like such a big deal to general readers. For anyone familiar with scholarship of Renaissance Hermeticism, however, the implications are far-reaching, even bordering on the sensational. Ever since Frances Yates’ Giordano Bruno and the Hermetic Tradition (1964), countless scholars and popular authors have been telling us that the revival of the “Hermetic Tradition” began with Ficino’s Pimander of 1471, and that ever since, throughout the sixteenth century and well into the seventeenth, Hermes’s writings had become a very significant factor in the development of Renaissance religious and intellectual life. Presumably, this means that people had actually been reading Hermes’s writings. But if so, had nobody noticed that Ficino's Pimander was, in fact, an incomprehensible muddle? And if they had noticed, what had they done about it? Perhaps most importantly: was it at all possible, for such Renaissance readers, to distill the actual contents of the Hermetic writings from the translations available to them? If not, what did “Hermetism” actually mean for them? And what about all those modern scholars who have written large books and learned articles about Renaissance Hermetism? One cannot help wondering how many of them ever bothered to sit down and actually read he foundational classic of the entire tradition. 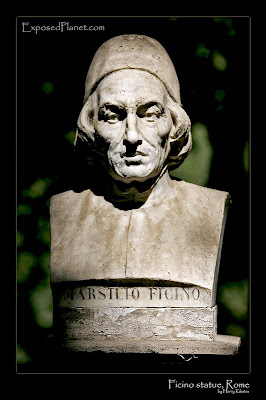 Spurred on by his initial discovery, Campanelli began working on a critical reconstruction of Ficino’s original Pimander, and the final result has been published with an Italian publisher in 2011. It is a very impressive example of painstaking philological scholarship, and a good reminder that, in the world of textual research at least, der liebe Gott lebt im Detail. So bear with me. In the first chapter of his 260-page Introduction, Campanelli analyzes Ficino’s repeated attempts at sketching a profile of Hermes Trismegistus, concluding that he was mostly trying to flatter his maecenas Cosimo de’ Medici by providing him with all the attributes of the ancient Egyptian sage, or the reverse (p. XLI, LIX). Campanelli then gets down to his real core business, analyzing all the editions of the Corpus Hermeticum that were published during the Renaissance. It is important to realize that Ficino himself never tried to get the Pimander published: the Treviso edition, published on 18 December 1471, was the unauthorized initiative of two humanists, the Flemish Geraert van der Leye (Gherardo de Lisa) and his Italian colleague Francesco Rolandello, who seems to have provided the manuscript. And it is here that something went awfully wrong, for the printed version is so corrupt that Campanelli does not hesitate to speak of an ‘authentic textual disaster’ based upon ‘scandalous negligence’ (p. CX-CXI). Most likely, according to his analysis, the printers were working under such heavy time pressure that they made countless errors, and neither van der Leye nor Rolandello ever took the trouble to check and correct the proofs… The troubling fact is that precisely this butchered version of the Pimander became, nevertheless, the basis for the great majority of later editions of the Corpus Hermeticum: the 3rd one (Venice 1481), the 4th (Venice 1491), the 5th (Venice 1493), the 6th (Paris 1494), the 7th (Mainz 1503), the 8th (Paris 1505), the 10th (Venice 1516), the 12th (Lyon 1549), and the 14th (Basle 1551). This does not mean that the text remained unchanged. On the contrary: from one edition to the next, and especially since the 1494 version of Jacques Lefèvre d’Étaples, successive editors tried to improve the text, thus creating a wide range of variant readings of an original that had been wholly corrupt in the first place. Hence it is hardly surprising that when Gabriel du Preau was preparing his French translation (published in 1549) he admitted being ‘vexed & tormented’ by all the contradictions he discovered between the three Latin versions at his disposal (Mercure Trismegiste Hermes … de la puissance & sapience de Dieu, Introduction).
What then about the other editions, absent from the list above? The 2nd edition (Ferrara, 8th of January 1472: just a few weeks after the 1st) was based upon a separate manuscript of Ficino’s translation; but although it is much more reliable than the princeps, it seems to have remained a “stand-alone” edition without much further influence. The 9th edition (Florence 1513), edited by Mariano Tucci, was again based upon a separate manuscript of Ficino’s translation and became the basis for two later editions: the 11th (Basle 1532, edited by Michael Isengrin) and the 16th (Cracow 1585, edited by Annibale Rosselli, with huge commentaries). And finally (not counting vernacular versions such as du Preau's), we have three editions independent of Ficino’s text: the 13th Corpus Hermeticum edition in succession consists of the first publication of the Greek original by Adrien Turnèbe (Paris 1554); the 15th was a new Latin translation by François Foix de Candale (Bordeaux 1574); and finally, the 17th was yet another new Latin translation by Francesco Patrizi (Ferrara 1591). This certainly suggests that interest in the Hermetica was growing during the second half of the sixteenth century, especially its last three decades; but Campanelli claims that, in fact, none of these three new editions had any success at all, leaving Ficino’s Pimander as ‘almost the only vehicle of the Corpus Hermeticum in Europe’ in this period (p. LXXXIII). One might want to question that point, but it seems clear that van der Leye and Rolandello (and of course their printers) created a mess that would continue to create enormous confusion about the Hermetic message throughout the sixteenth century. 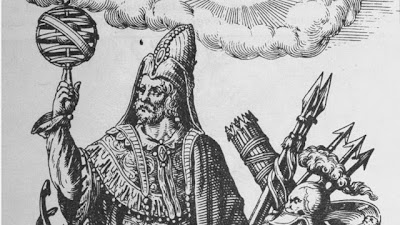 Having established the history of the printed editions, Campanelli proceeds to delve deep into the ‘vast archipelago’ (p. CXXI) of surviving manuscripts of the Pimander (those that were used for the first two editions of 1471 and 1472 are no longer extant). Demonstrating great philological expertise and attention to technical detail, he finally ends up selecting fifteen manuscripts most suitable for reconstructing Ficino’s original translation of the Corpus Hermeticum, published in a meticulous critical edition on pp. 1-111 of his book. In the final chapter of his Introduction, he goes into considerable detail about the nature and quality of that translation. His conclusions are very interesting. Ficino appears to have been much concerned with improving the literary style of the Greek original, trying to make it all more elegant and beautiful. Sometimes he changes the original meaning (see esp. CCXLVIIff for what looks like intentional modifications), and his formulations tend to be far more expansive and dramatic than the wording of the Greek text (not least in cases that reflect his own hostily towards the body: p. CCXXVII). More importantly, he tends to read the Hermetic content through his own lense of Neoplatonic Christianity (p. CCXXXVII); and one can see that, understandably enough, he looks to the Latin Asclepius as a model for his own translation (p. CCXLVII).
In conclusion, even the most reliable version of Ficino's Pimander turns out to have been quite different from what we find in the Greek manuscript that had been brought to Florence by Leonardo da Pistoia (p. CCL). But what really messed up things for the thrice-greatest was the famous 1471 edition. In the wake of that disaster, and as the number of editions increased, the original meaning of the Corpus Hermeticum was bound to get buried under an ever-expanding number of mistranslations, misinterpretations, and well-meaning but counterproductive emendations. Hence, what we have is a lively Renaissance discourse about Hermes, but no Hermetic Tradition.