It gives me great joy that the middle initial in my name refers to my maternal grandfather Jacobus Lissenberg (1894-1970), who from 1929 until his retirement in 1964 worked as a minister in a small Dutch denomination, the Covenant of Free Evangelical Congregations in the Netherlands, and was a prominent voice in that community. Yesterday I attended the presentation of a book that has been written about him by the church historian Leo Mietus and which tells the hitherto forgotten story of Lissenberg's activities as an opponent of fascism and national socialism.

Like the members of many other Dutch denominations during the 1930s, Free Evangelicals were often hesitant and undecided about what to think of Mussolini and Hitler; and according to the dominant view among historians of this community, their narrow millenarian focus on the imminent arrival of the eschaton resulted in a passive attitude towards current political events. Leo Mietus corrects this picture by showing that Jac. Lissenberg, one of the most prominent and authoritative voices within the Free Evangelical Community of the Netherlands, spoke out against fascism, national socialism and antisemitism from the very beginning. As editor of the community's journal Ons Orgaan, he made perfectly clear that any acceptance of fascist or antisemitic ideology was wholly incompatible with the core convictions that evangelical Christians should hold sacred. As such, he played an important role in warning his fellow believers against the temptation of a collaborationist attitude and opening their eyes about the truth of what was going on. Based on meticulous archival research, Leo Mietus tells the story of Lissenberg's anti-fascist engagement through the 1930s and 1940s and the resulting discussions, including conflicts with colleagues and other members of his community. During the preparation of his book, Mietus also conducted several interviews with my mother, who is now 92 and the only one of Jac. Lissenberg's children to be still alive. Some photos from the family album are reproduced in the book. 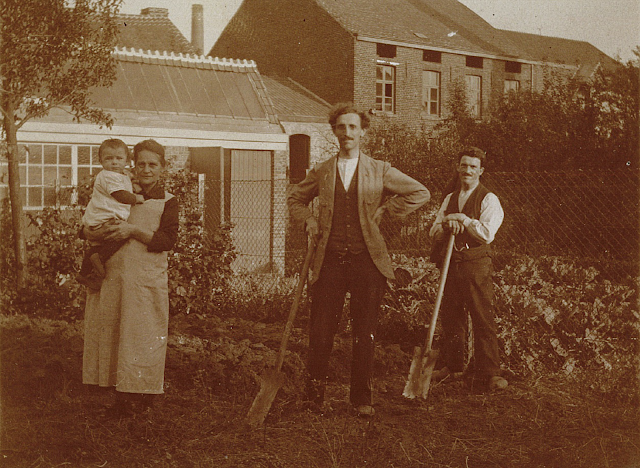 To read this story about my grandfather was a moving and inspiring experience for me. Having been raised with my mother's stories about the German occupation, his horror of fascism and antisemitism came as no surprise, but I did not know how explicitly and eloquently he had expressed his convictions in writing and how influential he had been in his religious community. I also learned much about other aspects of Jac. Lissenberg's personality, such as his profound love for literature, music, and art (including the satirical anti-fascist cartoons of Georg Grosz; but my mother had also often told me about his hobby of hunting for paintings at the Waterlooplein, the famous Amsterdam flea market in pre-commercial times).
As we find ourselves faced with a return of right-wing extremism and racial hatred today, and with a public debate that often seems to mirror that of the 1920s and 30s, Lissenberg's writings as recovered by Mietus remain as relevant as they were in the 1930s. He lived in other times, and his religious or spiritual outlook was somewhat different from my own, but this book made me realize how superficial such differences may sometimes be. Underneath the transformations of history and culture, profound as they may seem, I perceived an even deeper moral and existential continuity that seems to have been running through our maternal family line for a century or more. Jac. Lissenberg lived his life with his eyes and heart wide open, and never hesitated to speak out on behalf of goodness, truth, and even beauty. I feel proud to be his grandson.

Foreword
I know my grandfather through my mother’s memories. Thanks to her stories, after his death in 1970 he lived on in my family’s collective memory not just as a good and sincere human being but as a man of righteousness, a man who lived from his deepest convictions and inspired others by his example. Undoubtedly he himself would have been the first to protest against such a picture and try to relativize it, because of his strong conviction that no human being can ever claim to be better than others. Indeed he made no such claim, and it is precisely for that reason that the picture is correct. It is the key to his personality and explains his unwavering attitude towards National Socialism.
On the basis of extensive and very diligent archival research, Leo Mietus in this book corrects the traditional image of the Covenant of Free Evangelical Congregations in the Netherlands as a “defeatist faith community that had remained in default during the 1930s and 1940s.” As it turns out, in the Free Evangelical periodical Ons Orgaan, the authoritative voice of minister Jacobus Lissenberg was speaking out, ever again and without the slightest ambiguity, against Hitler’s ideology as “a most fatal spiritual revelation from the abyss” and against antisemitism, “from the poison of which God may preserve the Netherlands!” For me as his grandson, the fact that this was my grandfather’s opinion did not come as a surprise. My sister and I have been raised with my mother’s memories of the German occupation: the persecutions of the Jews, the razzias, the hunger winter, the voice of Hitler bragging over the radio, or the sinister threat of soldiers’ batallions that she, as a little girl lying in her bed at night, heard marching through the silent streets while singing sentimental German folk songs. There was also the amusing anecdote about an in-law who imagined he could visit my grandfather in his home dressed in the uniform of the NSB [the Dutch National Socialist organization] but was told to go home and change into civil clothes before he could come inside.
As grandchildren we had also heard the beautiful story of how one Sunday, my grandfather led his community in church to sing the Wilhelmus (the Dutch national anthem) whispering. But that his public role as a critic of Nazism in the Free Evangelical Congrations had been that important – this we hardly knew. From the archival materials that Mietus has collected and put in context, it has now become clear how early and how sharply Lissenberg perceived the true nature of National Socialism, how forcefully and explicitly he took his stance both in speech and in writing, and how courageously he responded to those who thought their Christian beliefs could be combined with support or tolerance for the Nazi ideology. However, it was typical of his approach that he nevertheless refused to condemn or “cancel” people as human beings because of their weakness or lack of deeper understanding of what was really going on. Lissenberg considered it his task to be a witness of the truth and try to arm his parishioners against the temptation of evil, but as concerns those who succumbed nevertheless, he left judgment to God.
This book’s title is very well chosen, for it touches the core of Lissenberg’s existential attitude to life. Quite rightly he comes back several times to Kierkegaard’s statement that Christian faith is like “floating above a thousand fathoms’ depth.” These words have sometimes been placed in connection with a quotation by Wittgenstein, who compares religion to the depths of the ocean that remain undisturbed regardless of the storms that may rage on the water’s surface. But Kierkegaard’s meaning was much more radical, and I am sure that Lissenberg followed him in this: about that unfathomable abyss in which we might drown at any moment we know nothing at all, not even whether any eternal rest will be found there. According to the Danish philosopher, as human beings we find ourselves in a permanent situation of “mortal danger” in which certainty is an illusion and all we can hold on to is our ability to let go. This analysis becomes acute in situations of war and occupation.
Thanks to this book, my mother’s memories of her father and my grandfather have gained a wholly new dimension, based on a wealth of factual information that had so far remained unavailable. The picture of his personality is now no longer limited to the personal sphere of family memories but has taken on a broader relevance for the church history of the Netherlands during the German occupation and the years before and after. Many thanks to Leo Mietus for rescuing Ds. Jacobus Lissenberg from oblivion and restoring him to the place in our history that he deserves.