History is the Mystery (Justinus Kerner and the Seeress)

As the Corona virus was dominating the media and everybody’s daily lives, many of my friends on Facebook began launching “book challenges” to entertain themselves and the members of their networks. I accepted a challenge to list “10 books that changed your life,” and soon discovered that it was not just great fun to select ten titles and write about them, but that the exercise triggered a process of self-reflection. It made me conscious of some deep and long-term motivations and obsessions that have very much determined my personal life and my career as a scholar as well (or the other way around?). After some delay, here is nr. 6 on my list.

Around the time I was finishing my dissertation during the mid-1990s, a colleague of mine organized a small discussion group about the topic “women and miracle stories,” which eventually led to an interesting collective volume. As I had to pick a topic for my contribution, I grabbed the occasion to get away from the New Age for a while and satisfy my curiosity about a book that I had heard about but never read. The author was Justinus Kerner (1786-1862), a minor Romantic poet who worked as a town physician in Weinsberg. He belonged to the second generation of Romantics during the so-called Vormärz period, a time of political restauration and conservatism that began after the Napoleonic wars and ended with the March Revolution of 1848. Typical of these decades was a general resurgence not just of religion but also of fascination with “the occult” – ghosts, spirits, after-life visions, and strange unexplained phenomena of all kinds. All of this was very much part of the cultural legacy of German Idealism, which took its inspiration not only from philosophy but also,  among many other things, from Christian Theosophy in the tradition of Jacob Böhme and Immanuel Swedenborg’s explorations of the Geisterwelt, the world of spirits. Most important of all, in the wake of Franz Anton Mesmer and the Marquis de Puységur, this was a time of widespread experimentation with techniques for consciousness alterations that could result in spectacular phenomena known as visionary somnambulism. 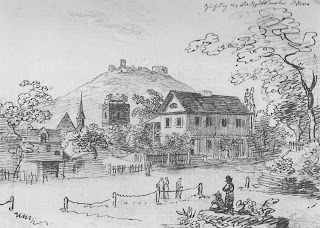 One day in the mid-1820s, a very sick young woman was brought to Kerner’s house in Weinsberg, which functioned as a kind of small hospital (you see it to the right here in this picture from the same period, with on the hilltop in the background the ruins of Weibertreu, a favourite meeting place of the Romantics). The patient's name was Friedrike Hauffe. She was born in 1801 and would die just a few years later at the age of only 29. She was suffering from a horrible combination of symptoms that is rather difficult to diagnose even today. The condition included fevers, severe cramps and bleedings, and she kept slipping in and out of strange incontrollable altered states. As nobody knew what to do with her, and her family was frankly desperate (“she became an image of martyrdom but did not die”), Kerner took her in as his patient. In his bestseller Die Seherin von Prevorst (The Seeress of Prevorst, 1829), he gives meticulous descriptions of his treatment methods. The book is known today as one of the earliest attempts at an empirical clinical study of what would be called paranormal phenomena today, and it is certainly the very best first-hand account of what Mesmeric somnambulism was all about. As the treatment continued, Kerner and his wife built up a close personal relationship with Friederike. The three of them established a type of intimate connection that would come to be known in Mesmeric contexts as a strong magnetic rapport. In this diagram made in a trance state, the so-called Sonnenkreis (Solar Circle), the two waving lines just within the periphery indicate Kerner and his wife, who functioned like a kind of protection between Friederike's inner world and the threatening intrusions from outside (left side, beyond the periphery). 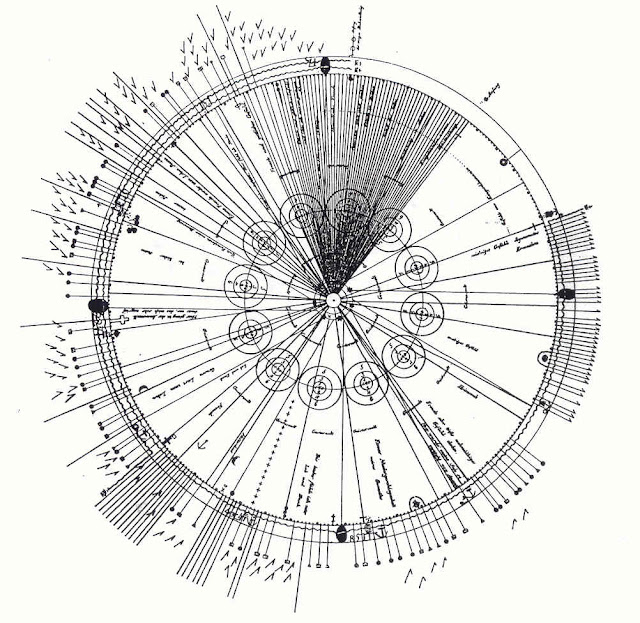 Most of all, the physician fell under the spell, not only of his patient's spectacular visionary and paranormal abilities, which made her famous all over Germany already during her lifetime; but also of her spiritual attitude towards suffering, very much influenced by a kind of “occultist Christianity” that was typical of Württembergian Pietism. Among the various perspectives from which Die Seherin von Prevorst can be approached (for instance as a source for German Romantic medicine and psychiatry, or for the prehistory of parapsychology), it can certainly be read as an account of Kerner’s personal spiritual conversion to a German-Romantic type of esoteric Christianity that responded to Enlightenment rationalism by taking its inspiration from what came to be known as “the Nightside of Nature.” This terminology referred to the mysterious realm of deep symbolic meaning that could be accessed through dreams and other altered states – the direct historical  predecessor of what Carl Gustav Jung would later refer to as “the collective unconscious.”

One has to read Die Seherin in the German original to fully grasp its fascination. Kerner was a poet who knew how to write a gripping narrative in powerful Romantic prose; and because he was a perceptive observer and a highly intelligent commentator as well, this made his book far superior to the rather boring standard accounts of somnambulistic trance phenomena. It was an immediate success. Thanks to it, Kerner is now considered a central figure for our understanding of esotericism in German Romanticism, but it also made him into a favourite target of contempt and ridicule by rationalist critics. For the more theoretical parts of his volume, by the way, Kerner depended on his friend and medical colleague Karl August von Eschenmayer (1768-1852), a fascinating character and author in his own right who deserves much more attention than he has received (as I have tried to make clear in an article that happens to be the very first one ever written about him in English). Together, Kerner and Eschenmayer found themselves lampooned as a comical duo (Kernbeisser & Eschenmichel) in Immermann’s hugely popular Münchausen novels. For historians of esotericism, it is important to be aware of Die Seherin as a crucial link between German Romantic Mesmerism and the wave of Spiritualism and Occultism in the anglophone world during the second half of the nineteenth century. 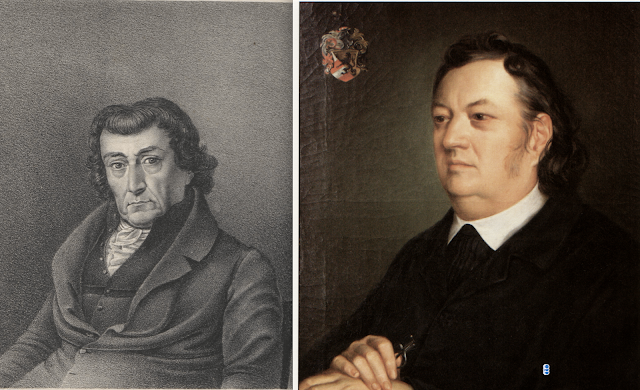 Kerner and the Seeress have played an important role in my own early development as a scholar. In 1996 I traveled to Weinsberg, where together with the president of the local “Justinus Kerner Society,” Mr. Ostertag, I made memorable tours by car to visit all the highy Romantic localities where the events described by Kerner had taken place. These had to do not only with Die Seherin, but also with Kerner’s other books about Somnambulism and a different though related phenomenon that became a topic of fascination for Eschenmayer and himself, demonic possession. I will never forget our visit to the tiny hamlet Orlach, the place where a young girl had become possessed by the spirit of a “black man,” as described by Kerner in his book Geschichten Besessener neuerer Zeit (Histories of Possessed Persons in Recent Times, 1834). As she was working in the fields, Magdalena Grombach was approached by a sinister dark man who eventually turned out to be a ghost: he claimed to have lived as a monk in a nearby monastery, where during his lifetime he had seduced and killed a whole series of women. Now their bodies lay buried under Magdalena’s family house, and he wanted them to be given a Christian burial so that his soul might find rest. Magdalena’s possession by this spirit took such horrible forms that finally, her family in fact decided to demolish the house. Lo and behold, they did find skeletons and gave them a proper burial – after which Magdalena was cured! Even today, this gripping story remains the stuff of local legend and folklore theatre performances in the neigborhood, as you can see here. As Mr. Ostertag and I visited Orlach, we actually found the very house in question, which still carried an inscription above the door: “this house was broken down and reconstructed due to well-known events etc.” After several drinks and random conversation (in heavy Souabian dialect) with the present owner, a Mr. Schumm, he went down into the cellar and came back – with a whole box full of early-nineteenth century manuscripts and objects related to Magdalena Grombach’s possession by the “black man”! It’s at such a moment that one knows how it feels to be a historian.

I ended up writing a very long article (available only in German, with an abridged version in English) about the story of Justinus Kerner and Friederike Hauffe. I still consider it to be among the best things I’ve ever written. This particular research project has been one of the chief reasons (although not the only one) for my interest in alterations of consciousness as a key factor in Western esotericism. But studying Kerner did something else for me too. It made something clear to me about the nature of historical research, an insight that has stayed with me ever since and has had a very strong impact on all my later work. It concerns a common and often barely conscious assumption that informs the work of many scholars – the idea that in studying a fantastic narrative, such as that of Kerner and his Seeress, our task is to clean away all those bizarre accretions and embellishments that have been added by "the mythical imagination," so at to uncover the much simpler historical truth that lies underneath. While working on Kerner and the Seeress, I suddenly realized that this assumption, with its disenchanting implications, was wrong – it was exactly the other was around! A “mythical” narrative such as Kerner’s story, no matter how fantastic, is always (and necessarily) much more streamlined and simple than the literally infinite complexity of the historical realities that lie underneath and on which it is based. In other words, our task as scholars does not actually consist in reducing complexity to simplicity. On the contrary, it lies in showing the true complexity of what might initially seem simple. The secrets do not lie in these supposedly “esoteric” narratives – on the contrary, they always lie ultimately where one might not expect them: in the enormously detailed and dazzlingly complex real-life events and intimate personal experiences of normal flesh-and-blood people in their supposedly “normal” lives. History is the true mystery.

PS. Below I add some photos I made in 2018 in the Kernerhaus in Weinsberg, which has now been turned into a small museum (warmly recommended to visit whenever you are in the neighbourhood).