On the Death of Khaled Asaad 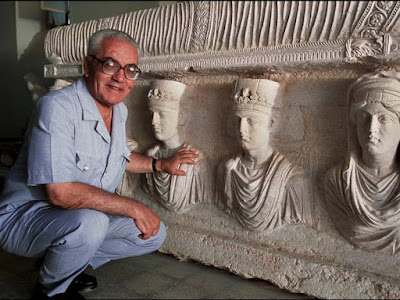 This week, IS tortured and killed Khaled Asaad, the antiquities chief of Palmyra. He was decapitated at a public square, and his body was hung from a Roman column in one of the ruins to the restoration of which he had devoted more than fifty years of his life. He was 81 years old.
After having neglected my blog for a year, this news hit me so hard that I felt I needed to write about it. But what is there to say? As with all the previous news about the atrocious horrors perpetrated by IS, my overwhelming feelings are grief and fury, combined with a debilitating sense of powerlessness. The Nazis have returned in our midst, only this time they do not do their torturing and killing behind barbed wire fences or prison doors but proudly display them on the internet. We are watching it on TV and reading about it in the newspapers, and then move on to our daily business. Because what can we do?
Just one thing. Speaking out about the values that we represent, or should represent, and mustering the courage to fight for them in word and deed, wherever we have a chance of doing so. This goes for everybody, anywhere in the world. But having been raised in a European country and devoting my life to studying, writing, and speaking about its cultural traditions, I may perhaps be excused for focusing on Western civilization. We are told that Khaled Asaad was murdered for the crime of "overseeing 'idols' in the ancient city" and "attending 'infidel' conferences as Syrian representative". This makes him one of the most recent casualties in a culture war that has been raging for thousands of years: that of exclusive monotheism against its mortal enemy, "pagan idolatry". We should not delude ourselves: historically, our "own" dominant Western culture has not been on Khaled Asaad's side but overwhelmingly on the side of his murderers. The idea that paganism and idolatry is the ultimate abomination that must be rooted out and destroyed, along with anybody who practices or sympathizes with it, goes to the heart of Jewish, Christian, and Islamic identity (though it should be added that while Christianity and Islam gained the power to put the idea into bloody action, post-biblical Judaism never had that chance and rather found itself on the receiving end of atrocities, as we know all too well). Moreover, (pace Peter Gay c.s.) it goes to the heart of Enlightenment rationalism as well, which inherited the Protestant view of paganism and idolatry. This story is not well known, precisely because our dominant cultural institutions are grounded in the very same bias and therefore prefer to tell the story differently. But the painful truth is that, culturally and historically, we are hardly in a position to mount our high horse and condemn IS for continuing our very own battle against the religious culture of the ancient world and everything it stood for. "We" have been every bit as brutal and cruel as they are being now, and until much more recent times than we care to remember.
But here is the paradox. In spite of everything, I deeply care about this same Western culture, for it has richly provided us with all those ultimate values that IS is trampling upon. In spite of all its horrors, a deep commitment to the Good, the Beautiful, and the True runs through the story of Western civilization as well - and this tradition is deeply indebted to the very culture of classical antiquity and Hellenistic civilization that IS would like to destroy. But I'm afraid that during the last couple of decades, we have rapidly been losing touch with these foundational values on which our very culture and civilization were built. Most of us no longer know who we are, what we are supposed to stand for, or why we should. The Good has been made subject to the laws of the marketplace (economic value trumps moral values: the question of what we should do is irrelevant if it cannot be paid for, right?). The Beautiful has been reduced to esthetics and leasure time activities (likewise for sale, of course). And as for the True - the province of science and scholarship, my own domain of activity - well, that is just a matter of opinion, isn't it? This is why the Humanities are declining, and too many of us (academics included) find it hard to see any difference between knowledge and information. This is why we have lost our ability to explain what we are all about. I don't mean to be cynical, but I'm afraid that this is the point of history at which we have now arrived as a culture and a society: we are in decline, and we know it. No wonder that we feel so vulnerable. No wonder that for so many people (not just "elsewhere" but at home as well) "Western civilization" no longer inspires admiration and respect but is becoming an object of hatred, contempt, or simple indifference. I hate to say it, but IS has a story. We don't.
Back to Khaled Asaad. From all that I can tell, I think that he was "one of us". By this I mean that he belonged to all of us who want to devote our lives to real values: knowledge, understanding, generosity, love, beauty, awe. It won't do to respond to his death only with some academic reflections on culture and civilization, although that must be done too (after all, those were the values he deeply cared about and that ultimately cost him his life). We must take our stand next to him, for his horrible death has made him a symbol of everything that is being threatened today and needs to be defended by us, at whatever cost.