In my very first blogpost on Creative Reading (2012) I wrote about the German poet Stefan George and his "hidden church of the spirit." At first sight, this elite cult of refined esthetics and homo-erotic spirituality might seem to have pretty little in common with madame Blavatsky (ridiculed by George himself as “die dicke Madame”, “the fat madam”) and the popular movement of Theosophy that was making headlines in the same period. However, in his excellent recent monograph Der George-Kreis und die Theosophie, mit einem Exkurs zum Swastika-Zeichen bei Helena Blavatsky, Alfred Schuler und Stefan George (The George Circle and Theosophy: with an Excursus about the Swastika symbol in Helena Blavatsky, Alfred Schuler and Stefan George) Jan Stottmeister shows that by making the comparison nevertheless, we can learn  much that has been forgotten about the cultural climate of the early twentieth century. The book begins with well-documented overviews of modern Theosophy and the esthetic milieu of the fin-de-siècle. What these networks had in common, in spite of all differences, was their counter-culturalism: “From 1889 ... to the turn of the century ... George moved in counter-cultural milieus that, by communicating knowledge about secrets, constituted themselves as the esoteric Other to the outside world. The outside world was the bourgeois society of the late 19th century, experienced as disenchanted, rationalized, dominated by mass culture, and hopelessly ugly. Estheticism and occultism, the esthetics and hermeneutics of secrecy, symbolist art programs and secret teachings, the intermingling roles of artist and visionary, artistic/religious and other alternative religious constructions of meaning – all belonged inseparably together within this milieu. Whether "the secret" meant the essence of a poetry that, following Mallarmé, should remain linguistically aloof and beyond the public gaze, so as to be revealed only to "âmes d'élite" (elite souls) capable of understanding it; or whether it meant the knowledge claimed by charismatic leaders of Orders that promised to initiate their pupils into the secrets of the world – such distinctions were subordinate to the general desire of demarcating oneself, socially, intellectually, and habitually, from the dominant culture of materialism (p. 91).
However, as George began establishing his circle after 1900 – by demarcating his vision from that of competing groups such as the "Cosmic Circle" of Munich (dominated by Alfred Schuler and Ludwig Klages), staking his claim of ultimate and undisputable authority, and instituting his cult of the "divine boy" Maximin – it became intolerable to der Meister to think that his pupils might show allegiance to any other "Masters" (such as the Theosophical Mahatmas) or to any other boyish vehicle of divinity (such as Jiddu Krishnamurti, the Indian boy elected by the Theosophists as their future World Teacher). As Stottmeister shows, the central figure in George's competition with Theosophy was the nowadays forgotten artist Melchior Lechter (1865-1937; for the only collection with full-color prints of his paintings, glass-paintings, prints and designs, see the catalogue Melchior Lechters Gegen-Welten of 2006).
Lechter turns out to be a fascinating character. He admired J.-K. Huysmans’ famous novel of extreme fin-de-siecle decadence, A rebours, and followed the example of its protagonist, Des Esseintes, by turning his house and atelier into a private artistic “Counter-World” (Gegen-Welt) against bourgeois society: a place where everything breathed a refined atmosphere of sacrality more reminiscent of a Catholic church than a living space. It became the favourite meeting place of George’s circle in Berlin; and among all George’s friends, only Lechter was recognized by Der Meister as a “Master” in his own right. Most notably, all George’s volumes of poetry first appeared in limited bibliophile editions designed by Lechter, who thereby dominated the visual imagination of George’s religion of art. However, Lechter was not just an extreme fin-de-siècle esthete, but also a great admirer of Madame Blavatsky. In his mind, these two perspectives seem to have gone perfectly together; and so it is not suprising that hidden references to his Theosophical beliefs are omnipresent in his artistic production, including his works commissioned by George. Stottmeister’s analyses of this discreet Theosphical presence in works of art are precise, detailed, full of interest, very well informed, and last but not least, written (like the whole book) in excellent prose with a fine sense of subtle humor whenever the occasion calls for it.
The fascination with Theosophy among members of his circle did become a problem for George. Sometimes he seems to have tried making opportunistic use of it for his own purposes, as in an intriguing conversation reported by Herbert Steiner (no relation of the founder of Anthroposophy Rudolf Steiner, discussed at length elsewhere in Stottmeister’s book), who claims that George described himself as a messenger sent by the Mahatmas (p. 199-200). But in the end, there could be only one Master in George’s universe. In October 1910, Melchior Lechter made a trip to India, together with another central member of the George circle, Karl Wolfskehl. Both had becomes members of the Theosophical Society briefly before (p. 254). They paid no less than five visits to Adyar, had a private meeting with Annie Besant, accompanied her and her followers on walks, listened to lectures, and met the young Hindu “vehicle of the world teacher” Jiddu Krishnamurti. Back home, Lechter published an account of his trip to India as Tagebuch der indischen Reise (Diary of the Indian Journey, 1912) and sent it to George as a Christmas present. This proved to be a fatal miscalculation. George refused to answer and cut all ties of friendship with Lechter. They had a few awkward meetings in later years; but as usual with George, the break was final and irreversible. Henceforth, George’s books were published without Lechter’s designs. For Lechter himself, the break was deeply painful. 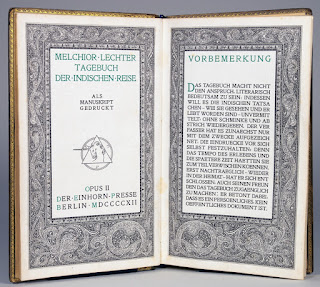 While Melchior Lechter is the central figure in Stottmeister’s analysis, separate chapters full of fascinating information are devoted to other figures relevant to the relation between George and Theosophy, notably the composer Cyrill Scott; the poet Karl Wolfskehl (the true “inventor of the George cult”, according to Stottmeister, p. 254); the writer, spiritualist, Theosophist, and alchemist Alexander von Bernus; and even the Marxist philosopher Ernst Bloch. Finally, Stottmeister shows that Friedrich Gundolf’s deeply apologetic book George (1920) is permeated not only by an agenda of hero-worship premised on George’s unique spiritual superiority (he is described, in biblical terms, as “The Way, the Truth, and Life”, p. 287) but also, simultaneously, by an urgently felt need to demarcate him sharply from the competition of Theosophy, “the worst idea of modernity” (p. 290).
Henceforth (and this is a familiar story in the study of Western esotericism) the dimension of Theosophy and occultism was written out of standard scholarly treatments devoted to Stefan George and his circle. Just as (to mention just one parallel) Swedenborg was reduced in academic Kant scholarship to no more than a ridiculous Spirit Seer without serious philosophical import, Theosophy got reduced to no more than the flaky brainchild of “die dicke Madame”. In a sharp and perfectly justified critique of the dominant academic trend in Germany after World War II, Stottmeister remarks (with obvious reference to Adorno’s famous definition of occultism as “the metaphysics of the stupid guys”) that “from an academic perspective, the occultist interests of the smart guys – Ernst Bloch and Walter Benjamin, to mention just those closest to Adorno – are no longer noticed. In the decades after World War II, henceforth historians of modernity just know about one type of occultists: Nazis” (323). The deep irony is that such notions of “Nazi occultism” have been embraced as historically correct by generations of German academics, in blissful ignorance of the fact that they were thereby lending credence to occultist pseudo-histories themselves (largely originating from Pauwels & Bergier’s bestselling Morning of the Magicians, but given credence, as demonstrated by Stottmeister, by the authoritative work of George Mosse). 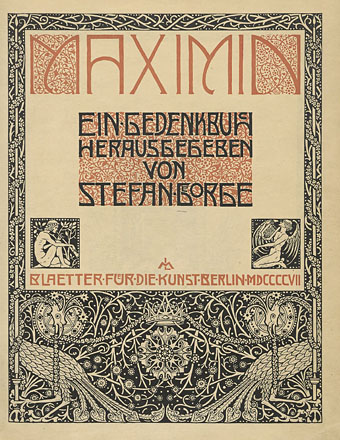 These concluding remarks about the question of National Socialism – inevitable in a book like this, given the oft-debated question of how George’s “Secret Germany” is related to the Third Reich – prove to be the upbeat for a truly impressive Appendix of more than seventy pages, devoted to “Helena Blavatsky, Alfred Schuler, Stefan George, and the Western History of the Interpretation of the Swastika Sign” (pp. 327-398). This appendix should definitely be translated into English as soon as possible. The Swastika sign was not just adopted by the Nazis as their symbol, but also appears prominently in the seal of the Theosophical Society (as well as in Blavatsky’s private seal), on Melchior Lechter’s designs of books from the George Circle, as well as in the work of Alfred Schuler (the central figure of the Munich “Cosmic Circle” that originally overlapped with George’s circle). As such, it looks like a red thread among George and Theosophy that requires interpretation. Stottmeister has excellent things to say about what he calls the “Swastika effect”, which makes it psychologically impossible for us to see the swastika without being reminded of the Nazis. In fact, however, the sign became popular first “in apolitical contexts: as the sign of an occultist society that actually promoted the brotherhood of races and nations, as a favourite ornament in Jugendstil and Art Deco design, and as a profane business logo for products of all kinds (p 330). Ironically, from our present-day perspective, it was seen as a sign of good luck. Against the background of popular 19th century theories of race and evolution, including antisemitic argumentations for Aryan supremacy such as Emile Burnouf’s La Science des Religions (1870), Stottmeister provides a sterling analysis of how the swastika symbol adopted from India functioned in the context of Blavatsky’s “race-theoretical anti-racism”, followed by equally impressive discussions of Alfred Schuler’s obsession with the symbol and, of course, its appearance in the circle around Stefan George. Any further non-political use of the Swastika became impossible after World War II, of course, for as Stottmeister notes, “historical contextualizations were powerless against this reconditioned visual perception. The Good Luck sign had been transformed irreversibly into a sign of Horror” (p. 344).
Still, powerless or not, what is the point of historical scholarship if we do not insist that fiction can be distinguished from fact and that it is important to do so? Like all good researchers in the modern study of Western esotericism, Stottmeister gives us a careful deconstruction of ingrained academic myths that have been taken for granted by scholars for generations and have obstructed and distorted our view of historical reality. This pars destruens is necessary in order to clear the ground for the pars construens that should follow in its wake: that of reconstructing our standard ways of imagining Western culture from the bottom up.