Later this week I'm giving a paper about Will-Erich Peuckert at a conference in Siegen about Trance and Folklore. Because of that topic I decided to prepare myself a bit by taking a closer look at a famous academic cultbook of the 1970s that I had bought second-hand last week, Hans Peter Duerr's Traumzeit: Über die Grenze zwischen Wildniss und Zivilisation. From what I've heard, it made big waves in Germany at the time of publication, selling a stunning number of 150.000 copies. 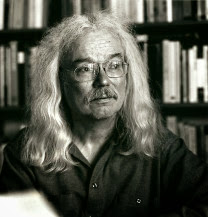 But it turned out to be a disappointment. Some books (academic or not) become bestsellers because they hit the Zeitgeist exactly at the right moment, and this is definitely a good example. But the flip side is that they tend to age badly: they start their career as a "secondary source" widely read by scholars and students and taken seriously for its supposed contribution to research, but end up as a "primary source" documenting a mentality that is no longer ours. They may escape that fate only if the sharpness and originality of their analysis transcends the contingencies of their original time and place.
What must have made Duerr's book super-cool at the end of the 1970s is the combination of two things: (1) a countercultural valuation of everything that ran counter to establishment society and its Christian and rationalist values (myth, magic, the non-rational, sexual expression, ecstasy, and most of all, psychoactive substances) and (2) a display of scholarly erudition so extreme as to make it impossible for critical academics to dismiss it out of hand. And if I write extreme, I mean just that: Duerr's actual text is ca. 200 pages long, followed by ca. 340 pages of footnotes and a bibliography of 90 pages. Let me hasten to point out that I have nothing against many footnotes and long bibliographies, on the contrary. But the problem of Duerr's book is that it is not actually a coherent argument backed up by references: it is a toppled-over file cabinet documenting the author's voracious reading - or at least, so one hopes! -, while the main text amounts to little more than some comments on those readings and a largely unsuccessful attempt at creating some semblance of order. For even most of those 200 pages of text are not really by Duerr himself: to a large extent, they consist of quotations from those sources mentioned in the footnotes. If one were to delete those quotations, one would be surprised by how little text there remains. And what does the text say? Not very much either. Duerr is adept in the art of suggesting profound thoughts without keeping his eye on the ball and finishing arguments up to their conclusions. Moreover, his later chapters degenerate into the kind of quasi-philosophizing that seems profound after many glasses of wine late at night, but not so much so in the hard light of morning. No, this is not the way to do it. Duerr's topics are fascinating and they deserve serious study. His footnotes and bibliographies are full of treasures. And I agree with him that we need to learn much more about the role of ecstasy and trance in religion and culture, whether induced by psychoactive substances or by other means. All of this deserves our attention as scholars. But not this way.