This week I have been re-reading Der Tod in Venedig. Thomas Mann has been my favourite German author for several decades now, but my memory of this particular novel had receded almost completely behind the more recent experience of watching Luchino Visconti’s famous movie of 1971. Because I happened to be reading a contemporary novel at the same time – Yann Martel’s Life of Pi (in this case I had seen the movie first) – I was reminded once more that one should never allow one’s standards of quality to be determined by the average level of good and professional writing, but only by the example of truly great authors. No offence intended to Martel, who is competent enough as a writer, but obviously Mann is in a different league altogether. It had been some time since I had read prose of such superior beauty, and the experience brought me straight back to one of my long-term topics of interest and reflection: the nature of beauty and erotic desire. For that, of course, is what Mann’s novel is all about. It tells the deceptively simple story of a famous writer, Gustav Aschenbach, who, following a sudden impulse, decides to escape from his daily work discipline to take a holiday in Venice, where he falls under the fatal spell of an incredibly beautiful teenage boy, Tadzio, who is staying with his family in the same hotel. They never exchange a word. All that Aschenbach does is watching his “idol” from a distance during dinner, on the beach, or during sightseeing tours through the city. When the great man finally succumbs to cholera, while sitting in his chair on the beach, Tadzio is hovering in front of him on the edge between earth, water, and sky, as a luminous figure – Hermes the Psychagoge – beckoning him across the threshold between life and death.

Mann’s lifelong struggle with his homoerotic desires is a key to his oeuvre (see the brilliant biography by Herman Kurzke, which cannot be recommended highly enough, even if it might go just a bit too far in reducing Mann’s Urkram entirely to sexual/erotic repression and sublimation), and his allusions to Plato’s Phaedrus are obvious and wholly explicit. Therefore I decided to re-read that dialogue as well, in a good translation by Robin Waterfield. What I knew best was the famous center part about the four divine frenzies, the chariot of the soul, and its “wings of desire” that start growing in the presence of beauty (cf. Wim Wenders’s movie of that title, known as Der Himmel über Berlin in German). This time I paid more attention to the first parts as well. First Phaedrus recounts a speech by the famous orator Lysias, who argues that an older man who desires a younger boy should take care not to lose his wits by actually falling in love with him, but should keep a cool head and just get what he wants. It’s essentially a cynical argument that highlights the risks and disadvantages of losing one’s reason in the pursuit of sex. Socrates responds by coming up with a speech of his own, which emphasizes that the lover’s erotic passion is disadvantageous and risky to the beloved as well.
Now just imagine. There they are, the older man Socrates and the young attractive Phaedrus, lying in the soft grass under a great tree outside the gates of Athens, far from any prying eyes, and reaching a clear conclusion: one should not give in to the irrational passion of erotic desire! It is precisely at this point that Socrates is interrupted by his inner daimon, who tells him that the tale he has just been telling is utterly false: he has committed a terrible offense against the great God of Love, and should do penance. And so he does, by launching into a speech with an entirely different message, which praises not reasonable restraint but the frenzied state of erotic madness (mania) as a divine condition that leads to true and lasting knowledge. By gazing upon a beautiful human body, the soul is reminded of the absolute beauty that it has once beheld when it was still travelling in the company of the gods along the outer rim of the heaven. From there it could gaze into the region beyond heaven, which “has never yet been adequately described in any of our earthly poets’ compositions, nor will it ever be”: this is the home of absolute unchanging and everlasting beauty, of which the passing images of corporeal beauty in this temporal world can give only a reflection. This beauty is the proper divine nourishment for the wings of the soul: at the sight of a beautiful human body, they spontaneously begin to grow, getting ready to carry the soul upwards back to its divine origin. 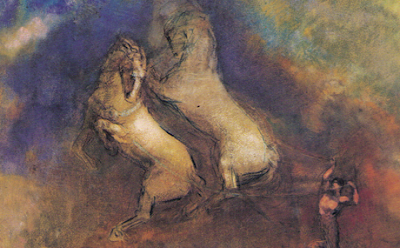 It’s a splendid narrative, compellingly beautiful in its very analysis of beauty. Reading Plato’s Phaedrus again, in conjunction with Thomas Mann Tod in Venedig, I couldn’t help musing about the incredible power of ideas. The impact of this relatively short dialogue can hardly be overstated, and regardless of its beauty (or, rather, because of it?) it must be admitted that its effects have been far from just positive. Firstly, Plato’s insistence that we must find beauty beyond the body has given legitimacy to Christian obsessions with sex and sin, at least since Augustine, leading to pervasive mechanisms of repression and sublimation that are the object of psychoanalysis and remain omnipresent in our society to the present day. Secondly, the narrative simply denies beauty to women; and while this would eventually be corrected, when Platonism got heterosexualized into a veritable “religion of beauty in woman” – medieval chivalric ideals of “courtly love”, some currents of Sufism, Renaissance Platonism after Ficino, Romanticism – it remains doubtful, to say the least, whether the masculine gaze can at all be translated into a feminine gaze on corporeal beauty (whether masculine or feminine) – or whether it should. And finally, the Platonic ideal of love has led to an implicit “complicity with death” at least since German Romanticism: perhaps beginning with Justinus Kerner (an underestimated pioneer: see pp. 236-237 here), eros has been implicated with illness and death, because only through dissolution of the body is it supposed to be possible for the soul to reach its true destiny. Nobody knew this better than Thomas Mann himself, for not just Tod in Venedig but also its splendid hetero-erotic counterpart Tristan, and indeed his entire oeuvre – particularly Der Zauberberg and Doktor Faustus, which really diagnose the cultural pathologies underlying World War I and II respectively – can be read as testimony to a persistent struggle with the human, moral, and ultimately political implications of Platonic eros. There is something awe-inspiring (literally numinous) in the realization that, in some very real sense, so much of the essential drama of Western culture may have its origin in a frenzied conversation between two Greek philosophers, lying under a shady tree on a lazy afternoon, talking about love.