As the Corona virus was dominating the media and everybody’s daily lives, many of my friends on Facebook began launching “book challenges” to entertain themselves and the members of their networks. I accepted a challenge to list “10 books that changed your life,” and soon discovered that it was not just great fun to select ten titles and write about them, but that the exercise triggered a process of self-reflection. It made me conscious of some deep and long-term motivations and obsessions that have very much determined my personal life and my career as a scholar as well (or the other way around?). Number 3: a Dutch collective volume edited by Gilles Quispel. 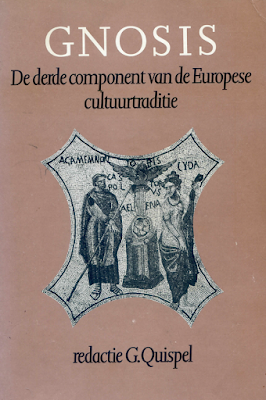 In a list of “ten books that changed my life,” this small Dutch volume cannot go missing – and yet I must confess that I include it with rather mixed feelings. It is not a very good book at all, and I select it only because the title had quite an impact on me. I bought this volume shortly after its publication in 1988, and quickly discovered that its general agenda and approach to the study of “gnostic” currents was quite different from my own. The editor, Gilles Quispel (1916-2006), was impossible to miss for anybody interested in such topics in the Netherlands by the end of the 1980s. He loved giving lectures for large general audiences, made appearances in the media, and was an internationally recognized authority of gnosticism. Of course I contacted him and he was kind enough to invite me to his home. Unfortunately though, we didn’t pull it off. Our personalities turned out to be so antithetical that we began clashing almost immediately, and our intellectual agendas were diametrically opposed. For my part, I wanted critical historical research free from apologetic agendas; for his part, he wanted to use his authority as a university professor to spread the gospel of gnosis. I do not think he would disagree with that assessment – for instance, when Roelof van den Broek and I organized a summer university “Gnosis and Hermeticism from Antiquity to Modern Times” in Amsterdam in 1994, I distinctly remember how he introduced himself during the opening round, not as a scholar or academic but simply as “Gilles Quispel, gnostic.”

A typical representative of the Eranos perspective, Quispel gave a peculiar twist to Jung’s concept of Gnosticism by reading it through the lens of a very specific Dutch type of Protestant Pietism known as bevindelijkheid. This virtually untranslatable word refers to a deeply conservative Christian tradition that emphasizes an individualized and experiential approach to biblical texts. Quispel loved to speak of gnosis as “knowledge of the heart,” but always made a point of pronouncing it as the bevindelijken did: not as kennis van het hart but in deliberately archaic Dutch as kennisse des harten – a nuance that is bound to escape anyone except a Dutch native speaker familiar with these traditions. It didn’t work for me. I must admit that my instinctive reaction to this type of language has always been similar to how Gershom Scholem reacted to reading Simone Weil, as formulated in a letter to George Lichtheim from 1950:

What attracts me to this very gifted unhappy young woman is the horrible smell of interiority, that … explains why I find Christianity so utterly unbearable. … Of course the swindle of pure interiority, from which may God preserve us, is presented here at a truly impressive pace, and all I can say is “Good for the Jews! as it just so happens that throughout the history of the world they have decidedly refused to take such a direction!” (Briefe II, 16-17)

Of course it wasn't entirely fair for Scholem to read Weil as representative of Christianity in general, but I understand what he means. Looking back at this time when I was in my late twenties and trying to find my way in a new and bewildering terrain, I cannot help wondering about the obscure psychological causes that lead all of us instinctively to say “no” to some things that come our way while saying “yes” to others, quite as instinctively – as in my case to Peuckert’s Pansophie, which (for reasons that I find hard to explain even to myself) strikes me as somehow quite similar to the Jewish perspective that Scholem preferred. Be that as it may, I was certainly making my own choices at the time. While the title of this volume, Gnosis: The Third Component of the European Cultural Tradition, had a decisive impact on the direction I took, its actual contents had an impact on the direction I did not want to take.

I was fascinated by the simple suggestion that the edifice of Western culture is supported by two pillars, “faith” (notably Christianity) and “reason” (rational philosophy, science) while a third but equally important component had been suppressed, neglected, and basically written out of the history books. Quispel called it “gnosis.” At this time I was mostly interested in music, literature, and all kinds of “alternative” ideas and traditions such as those I encountered in authors like Peuckert or Potok. Since none of it seemed to fit the “faith” and “reason” categories very well, or at all, Quispel’s book title made me wonder whether this mysterious thing called “gnosis” could be a suitable umbrella to cover everything I found so attractive. So that’s the direction I began to explore. I ended up writing a Master thesis in which I attempted to create a systematic typological framework to make sense of the gnosis-reason-faith triad. Bizarre as the combination may sound, I used a type of conceptual analysis that could hardly have been farther removed from Quispel’s Jungian perspective: american analytical philosophy. I had been introduced to it by the theologian Vincent Brümmer, one of my professors at the University of Utrecht, who was using it in a context of Christian-theological apologetics.

Although I did not share Brümmer’s beliefs at all, I appreciated his intellectual openness to other perspectives than his own and his respect for the power of rational argument.  I very well remember how one afternoon, I came out of his class and went straight into another one, where we were reading Merleau-Ponty’s L’oeil et l’esprit. It was as though I stepped from one universe right into another one. Merleau-Ponty struck me as profound but too vague, whereas analytical philosophy was very clear but somehow too superficial. I was looking for clarity because the subjects that attracted me were still quite vague and confusing to me, and so that combination prevailed. The MA thesis led to my first article in english; but I soon abandoned this approach as I found it too clean and artificial for my developing tastes. Under the impact of Jan Platvoet, who was teaching study of religions at the Catholic University of Utrecht, I moved towards what I came to call an empirical-historical approach that began with primary sources rather than theoretical abstractions. But that’s another story.

The bottom line is that Quispel’s title put me on a path that eventually led towards my understanding of esotericism as “rejected knowledge.” I saw that it was all about getting to know those ideas and traditions that had been excluded from mainstream culture due to the ideological and discursive dominance of “faith” and “reason.” Of course, my perspective soon got much more complicated, as it dawned on me that this field of “rejected knowledge” did not consist just of “gnosis” but could also be captured by other and quite different terms of exclusion, such as “paganism,” “idolatry,” “superstition,” “magic,” “the occult,” or simply “the irrational.” Be that as it may, although Quispel was very much an opponent of the entire agenda I stood for, I still owe him a debt of gratitude for coming up with that book title and making me ask the basic question: what is missing from the normative stories that our culture and our educational institutions are telling us? And why is it missing? Those questions kept me busy for more than twenty years, until I finally answered them, to the best of my ability, in my book Esotericism and the Academy (2012).